This year Chinese New Year is on Saturday 28th January (2017).
It will be the year of the red chicken (or fire rooster).
A few facts about Chinese New Year: https://www.factretriever.com/chinese-new-year-facts
and more: https://www.timeanddate.com/holidays/china/spring-festival
yet more: http://www.chinesefortunecalendar.com/NewYearDays.htm

Jamboree wrote this in another thread (New Year):

Jamboree wrote:2017 Year of the Monkey -- but only for a few more weeks!
On 28th January 2017 starts the year of the Rooster.
WELCOME TO THE YEAR OF THE ROOSTER!

During the Chinese New Year’s celebrations, there are many traditional activities, some local and others celebrated universally. The Chinese believe that as they enter a new year, they should start a new beginning. They clean their houses, pay off all of their debts, purchase new clothes, paint their doors, and even get new haircuts in order to have a fresh start for the new year.

Homes throughout China are decorated with special banners, many of which are red and gold; the traditional representations of happiness and prosperity.

One very fun tradition of the Chinese New Year is exchanging gifts. A traditional present that is given is small red envelopes filled with “lucky money”. These envelopes are given to children by their family and friends.

The dragon is a very popular symbol for the Chinese New Year. It is a symbol of strength and good luck. A Chinese New Year 2017 celebration would not be complete without a giant dragon parading down the street. The dragon costume is always very colorful and can be up to 100 feet long. People inside the costume make the dragon move up and down as it zigzags past the spectators.

During the Chinese New Year 2017 you will see fireworks and hear firecrackers! There are many beliefs about why fireworks are used. One belief is that the noise of the fireworks is supposed to scare away all evil spirits allowing the new year to begin without misfortunes. 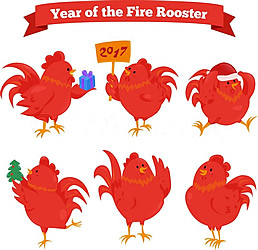 Wishing for everyone a happy, healthy and prosperous new year.

Hi, I have created a new website that is talking about Chinese Zodiac. If you would like to check on it,this is the address: https://www.chinesezodiacinfo.com/2020-geng-zi-rat-year/.  Thank you!
« View previous topic · View next topic »

Forum Café is a meeting place for forumites to socialise in a friendly environment and keep up to date with what's going on in forumland.
https://forumcafe.forumotion.co.uk/
Current date/time is Mon May 17 2021, 13:25