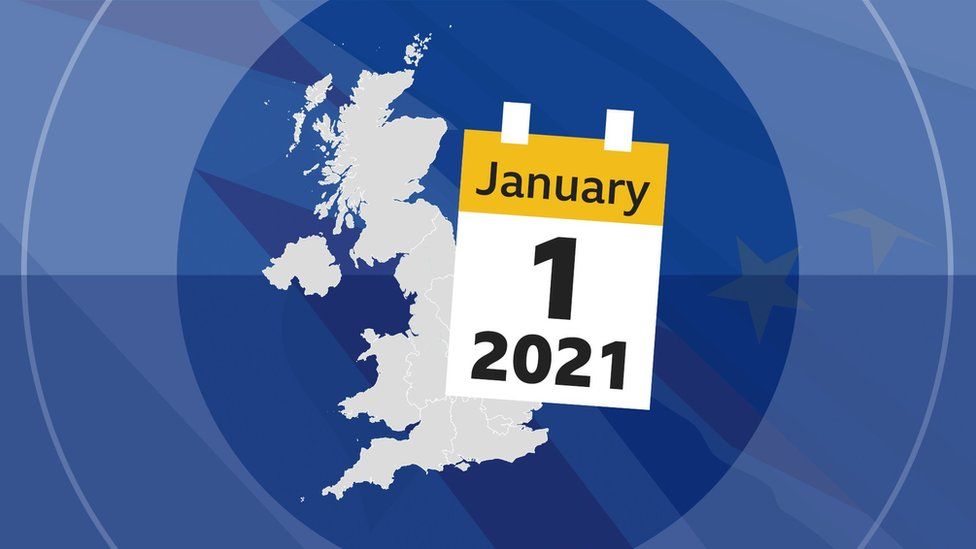 After months of negotiations, the UK and European Union finally agreed a deal that will define their future relationship. It comes into effect at 23.00GMT on 31 December.

I thought the UK had already left the EU?

It has. The UK voted to leave the EU in 2016 and officially left the trading bloc - it's nearest and biggest trading partner - on 31 January 2020.
However, both sides agreed to keep many things the same until 31 December 2020, to allow enough time to agree to the terms of a new trade deal.
It was a complex, sometimes bitter negotiation, but they finally agreed a deal on 24 December.

So what changes on 1 January?

The deal contains new rules for how the UK and EU will live, work and trade together.
While the UK was in the EU, companies could buy and sell goods across EU borders without paying taxes and there were no limits on the amount of things which could be traded.
Under the terms of the deal, that won't change on 1 January, but to be sure that neither side has an unfair advantage, both sides had to agree to some shared rules and standards on workers' rights, as well as many social and environmental regulations. You can read more detail on other aspects of the deal, including more on travel, fishing, and financial services, here .
Freedom to work and live between the UK and the EU also comes to an end, and in 2021, UK nationals will need a visa if they want to stay in the EU more than 90 days in a 180-day period.
Northern Ireland will continue to follow many of the EU's rules in order to avoid a hardening of its border with the Republic of Ireland. This will mean however that new checks will be introduced on goods entering Northern Ireland from the rest of the UK.
Now that it's no longer in the EU, the UK is free to set its own trade policy and can negotiate deals with other countries. Talks are being held with the US, Australia and New Zealand - countries that currently don't have free trade deals with the EU. 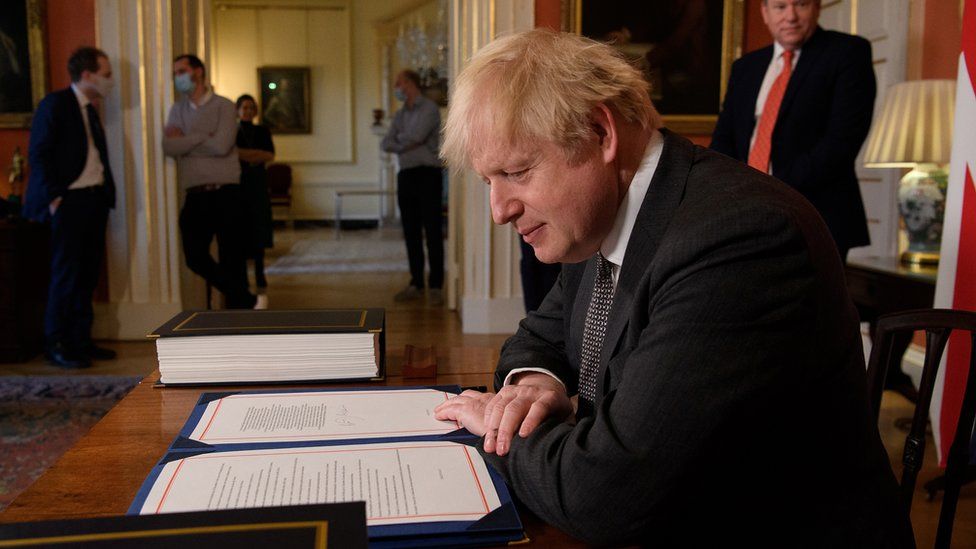 Will there be disruption at the borders?

There may not be new taxes to pay at the border, but there will be new paperwork, and the potential for it to cause delays is a serious concern.
"This is the biggest imposition of red tape that businesses have had to deal with in 50 years," according to William Bain from the British Retail Consortium.
The UK says it will delay making most checks for six months, to allow people to get used to the new system, but the EU will be checking paperwork and carrying out checks from day one. So if businesses are not prepared, or do not fill in the new paperwork correctly, it could cause delays and backlogs at ports like Dover.
The government has known about this for years, and has made plans to divert trade to other ports around the country and has built lorry parks in Kent, to avoid gridlock on the roads.
It's difficult to predict what the scale of any disruption might be, but government minister Michael Gove has said that UK businesses should prepare for some "bumpy moments".

Is this finally the end of having to hear about Brexit?

Sadly, no. Decisions are still to be made on data sharing and on financial services, and the agreement on fishing only lasts five years.
Also while the UK and EU have agreed to some identical rules now, they don't have to be identical in the future, and if one side takes exception to the changes, they can trigger a dispute, which could ultimately lead to tariffs (charges on imports) being imposed on some goods in the future.
Expect the threat of disputes to be a new constant in UK-EU relations.

The last few years have seen many words and phrases enter our lives. We haven't used them here, but politicians do use them. Here's what some of them mean:
Transition period: The 11-month period following the UK's exit from the EU (finishing at the end of 2020), during which time the UK has followed EU rules, to allow leaders to make a deal.
Free trade: Trade between two countries, where neither side charges taxes or duties on goods crossing borders.
Level playing field: A set of rules to ensure that one country, or group of countries, doesn't have an unfair advantage over another. This can involve areas such as workers' rights and environmental standards. Free trade agreements like the Brexit deal often include level playing field measures.
Tariff: A tax or duty to be paid on goods crossing borders.