Shoulda known it was too good to be true ...

Shoulda known it was too good to be true ...

Only yesterday I was saying to someone how peaceful it is out in my garden now, with a new harmonious atmosphere amongst the various folk that have made their home out there: (Robbie the robin; Chas & Dave, the wood pigeon wooing couple; Tit & Tat, the 2 blue tits; Blackie & 'Brownie', the two blackbirds that come a-visiting every now and then; Maggie (the magpie) has not been around for a while now, and the thrush, being a relatively new visitor on the scene - hasn't yet got a name.

Last, but definitely not least, there's Timmy - the squirrel with attitude!

Here's what I wrote yesterday:


All niggly aches and pains today, a fallout from yesterday mowing the lawn.  First time to use the new cordless mower and I just couldn't get over how light and easy - and quick it was...  I felt absolutely fine while doing it, was such a sinch ... but must admit was pretty much knackered afterwards - and it's usually the next day to feel the brunt.  I noticed that the bird feeder was empty while out there, and can't blame the pigeons or the squirrel this time!  I decided to get a special feeder which hangs from a branch from one of the trees, so it's not so easy for the squirrel to get at it and destroy it like he has done with all the other ones.  I've even caught the greedy critter stealing the whole thing and trying to bury it in one of his 'secret' caches!!  This is a proper one that you fill with seeds and has little perches either side at the bottom, so only the lightest little things can get at it with their wings and small beaks.  The robin and 2 blackbirds and now some blue tits have been availing of it - and I even have a thrush as a visitor now.

The two pigeons (the wood pigeons that actually live in a nest in the big tree at the end of the garden) and the squirrel now have to make do with the seed droppings down on the ground.  So feeding time is a happy, harmonious activity now.  No more fighting in the queue.

Also, Maggie was the boss that kept them all under control, no jumping the queue etc ...

Well .... I just happened to look out my bedroom window a while ago - and noticed that the hanging feeder (which I had only yesterday re-filled with this time little suet meal pellets) was kind of swung to one side and was jerking a bit.  On closer examination, I could see that Timmy was hanging from a nearby branch - upside down, by his tail, the tip of which was curled around this branch - and he had managed to pull the feeder over towards him and was holding it there with one front foot and scooping and shoving the little pellets with the other one, so they would drop down on the ground.

Then he gave one quick shake to the feeder, tilting it so that more of the pellets would fall down on the ground - and immediately then climbed down from the tree and scooped them up (all the time looking around furtively!) and then scarpered off with them as fast as you could say Stop! Thief!
Can you just credit the temerity of that tampering Timmy! 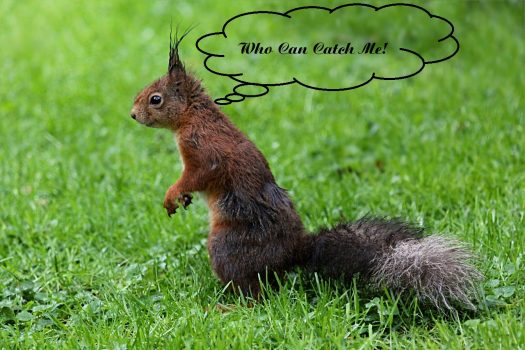 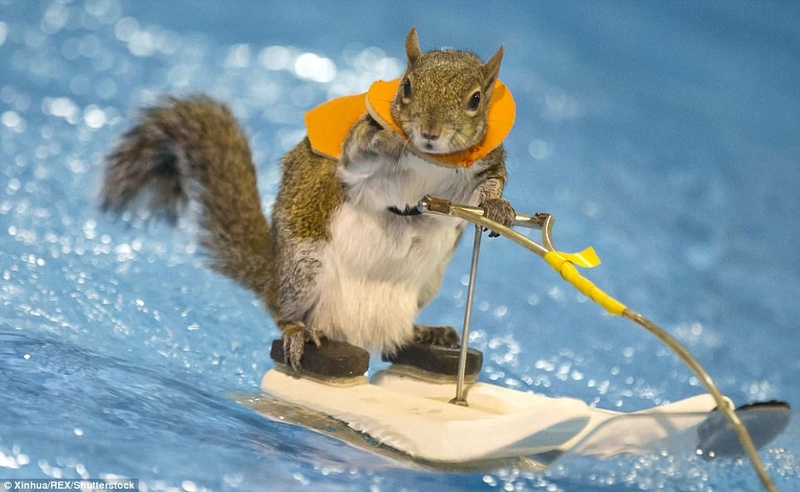 'Problem-solving could be key to grey squirrels' success, study finds' 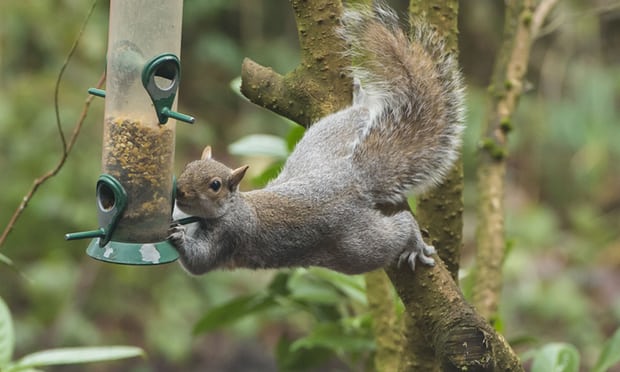 Grey squirrels arrived from North America in the 19th century and now outnumber reds by more than 15 to one.
Photograph: John Eveson/FLPA/Rex Shutterstock


The ability to solve problems may explain why grey squirrels are thriving at the expense of native red ones in the UK, research suggests.

Wild greys and reds were presented with an easy task (opening a transparent lid) and a difficult version (a more complex process of pushing and pulling levers) to get hazelnuts.

The two species were equally successful at the easy task, but more of the grey squirrels cracked the trickier one.

Researchers from Exeter and Edinburgh universities said this “superior behavioural flexibility” may explain the success of the greys.

Red squirrels have lived in the UK for thousands of years, but grey squirrels – which arrived from North America in the 19th century – now outnumber them by more than 15 to one .

“Many factors have been considered to explain why grey squirrels are more successful when they move into areas where red squirrels live,” said Pizza Ka Yee Chow, of Exeter’s centre for research in animal behaviour .

“These factors include disease resistance and the fact grey squirrels are bigger, but our research shows problem-solving could be another key factor for the success of greys. This might be especially important for an invasive species like grey squirrels, as they have evolved elsewhere and have to adapt to their surroundings.”
The researchers set up the tasks and observed squirrels solving them. About 91% of grey squirrels eventually solved the difficult task, compared with 62% of reds.

The study says inefficient foraging and food extraction are likely to lead to poorer fitness among red squirrels, harming their chances of reproduction – reduced breeding is known to be a major factor in the decline of the species.

“It is not yet clear whether grey squirrels are born better problem-solvers, or whether they work harder because they’re an invasive species living outside their natural environment,” said Chow.

“The current stage of our research is to look at this, and the results may give us more insight into the likely future of both species.”

The findings did offer some hope for red squirrels, as among those that succeeded at the difficult task, a few went on to solve it more quickly than greys in subsequent attempts.

The successful red squirrels were also quicker to change tactics after trying a method that did not work.
Prof Stephen Lea, also from Exeter’s research centre, added: “These results illustrate how investigating animals’ differing cognitive abilities can help us understand important issues in conservation.”

Ideally, the researchers would have studied wild squirrels living in the same area but because red squirrel numbers usually decline rapidly when grey squirrels arrive, they chose similar but separate locations.

The paper, published in the journal Animal Behaviour , is entitled “A battle of wits? Problem-solving abilities in invasive eastern grey squirrels and native Eurasian red squirrels.”

That's some family you've got living in your garden KK.

Whiskers wrote:That's some family you've got living in your garden KK.

Yes, it's a far livelier place now that Pepsi and Poppy, my two cats are no longer on the scene.