Boris Johnson is Prime Minister of the United Kingdom and, for the time being at least, there’s not a whole lot anyone can do about it. 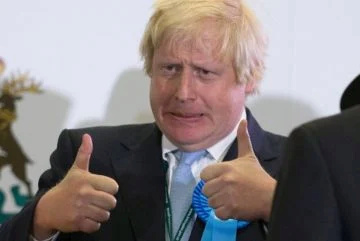 From his handling of the Covid-19 pandemic through to the ongoing issues around Brexit and the so-called “Irish border”, it’s fair to say BoJo has had a bit of a nightmare since arriving in No.10 Downing Street.
It’s all a bit of a mess and unlikely to be rectified anytime soon, so rather than wallow in the misery and madness of the Johnson era, the Irish Post has come up with a few jokes inspired by the man himself.
With lockdown lumbering on and the number of Johnson-related scandals only increasing by the day, here are 10 jokes to help ease the pain of it all.

1. Boris Down The Pub

Boris Johnson has pledged to head straight to the pub when they reopen and buy a drink for everyone there.
He likes to be generous, even if it will feel a bit weird sharing the same pint.

Why does no one believe Boris Johnson's promises about ending lockdown?
Because it always ends in tiers.

Boris Johnson takes the cabinet out for dinner.
The waiter comes along and asks her what he will be eating tonight.
“I'll have the steak," Boris says.
The waiter then asks, 'What about the vegetables?'
Boris replies, “Oh, they'll have the same as me.”

Why does Boris Johnson hate the European Union?
Because it included u and I but not him.

5. Boris at the Bank

Boris Johnson walks into a Bank
He needs to cash a cheque. As he approaches the cashier he says, "Good morning, could you please cash this cheque for me?"
The cashier says “It would be my pleasure. Could you please show me your ID?”
Johnson replies: “: “Truthfully, I did not bring my ID with me as I didn't think there was any need to. I am Boris Johnson, Prime Minister.””
The cashier says: “Yes, I know who you are, but with all the regulations and monitoring of the banks because of impostors and forgers and requirements of the legislation, etc., I must insist on seeing ID.”
Johnson says: “Just ask anyone here at the bank who I am and they will tell you. Everybody knows who I am.”
The Cashier responds: “I am sorry, Mr Johnson, but these are the bank rules and I must follow them.”
Johnson says: “Come on please, I am urging you, please cash this cheque.”
The cashier relents.
“Alright sir, here is an example of what we can do,” he says.
“One day, Tiger Woods came into the bank without an ID. To prove he was Tiger Woods he pulled out his putter and made a beautiful shot across the Thames into a cup of tea held by the bank's chairman without spilling a drop. With that shot we knew him to be Tiger Woods and cashed his cheque.
“Another time, Gordon Ramsay came in without an ID. To prove who he was, he made delicious chicken parm right here on my table, called the branch manager a fucking donkey, and fired everyone at the fish and chips joint next door. With that we knew who he was and cashed his cheque. So sir, what can you do to prove that it is you and only you?”
Johnson stands there thinking and thinking and finally says, "Honestly, my mind is a total blank. There is nothing that comes to my mind. I can't think of a single thing. I have absolutely no idea what to do."
The cashier replies: “That will do just fine good sir, will that be large or small notes?”

Boris Johnson, a Scotsman, a Welshman and an Irishman are all on a plane when the engines fail.
There is only one parachute on board.
Without a moment’s hesitation, the Scotsman sacrifices himself, shouting “For Scotland!” as he jumps out of the plane. The Welshman follows suit, shouting “For Wales!” as he jumps.
Then it’s the turn of the Irishman. He shouts “For Ireland!”…and pushes Johnson out of the plane.

UK politician Boris Johnson has promised to lie in front of bulldozers clearing a path for the 3rd Heathrow runway.
This should be no problem for him as he has already had plenty of practice lying in front of a bus!

Margaret Thatcher appears to Boris Johnson in a dream...
"Privatise the NHS and paint the Houses of Parliament green!" she says to Johnson
Johnson looks confused; "Why green?"
Thatcher smiles, "I knew you wouldn't object to the first part"

What's the similarity between Boris Johnson and the clapper on Big Ben?
They're both massive b***-ends.
« View previous topic · View next topic »

Forum Café is a meeting place for forumites to socialise in a friendly environment and keep up to date with what's going on in forumland.
https://forumcafe.forumotion.co.uk/
Current date/time is Mon May 17 2021, 14:41