Protesters have clashed with police after thousands of people turned up to a demonstration officers had "strongly advised" against attending.


Officers suffered suspected broken bones as angry scenes unfolded in Bristol city centre.
Crowds had gathered for the Kill the Bill demonstration in opposition to the Police and Crime Bill .
Demonstrators scaled a police station, threw fireworks into the crowd and daubed graffiti on the walls. 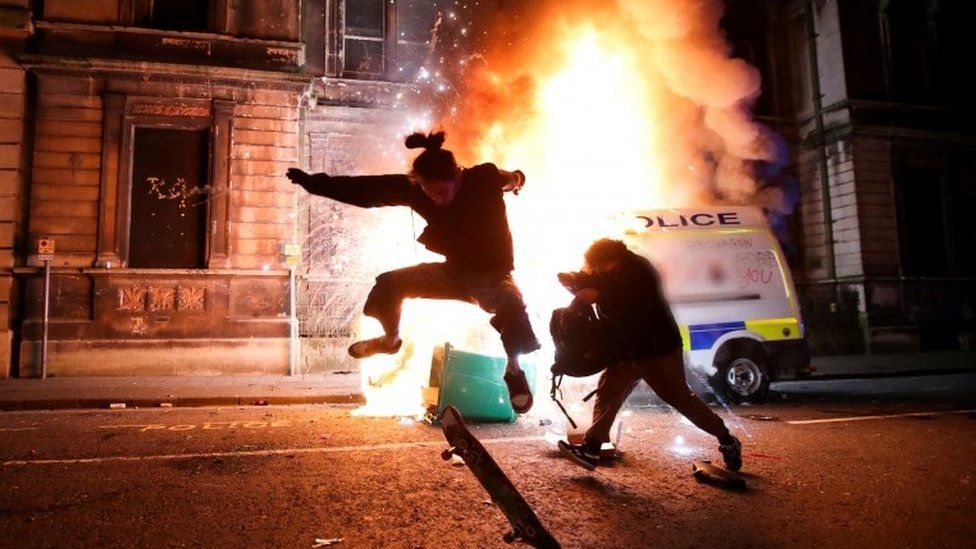 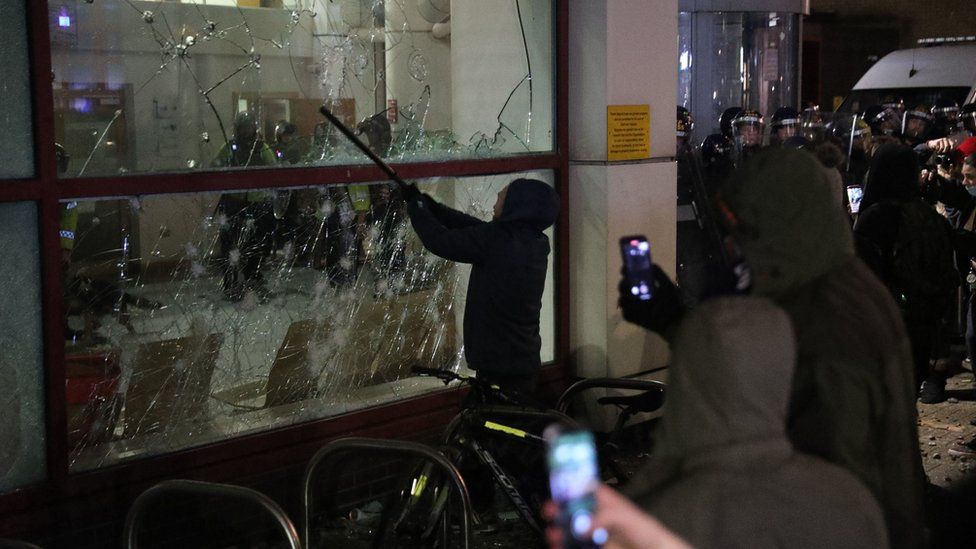 A protester smashes the window of Bridewell Police Station 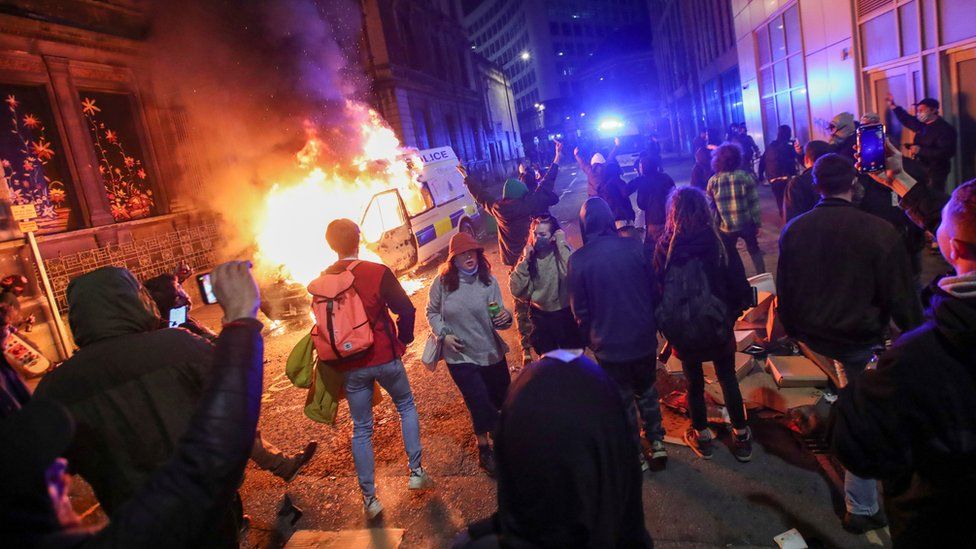 At least one police van was set on fire, with others smashed up and their tyres let down as the crowd chanted "shame on you".
Police said perpetrators would be "identified and brought to justice".
It is not clear if any arrests have been made and a spokesman for Avon and Somerset Police described it as a "rapidly-developing situation". 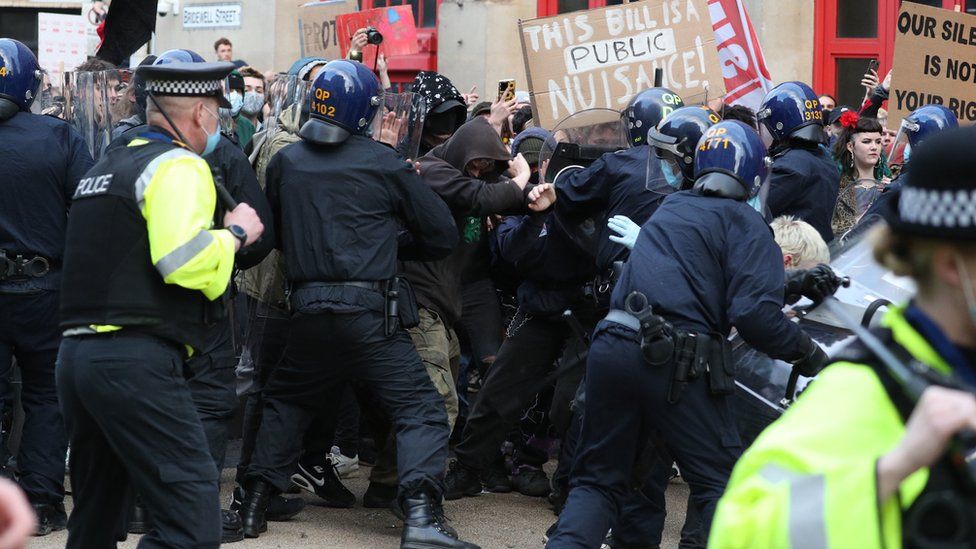 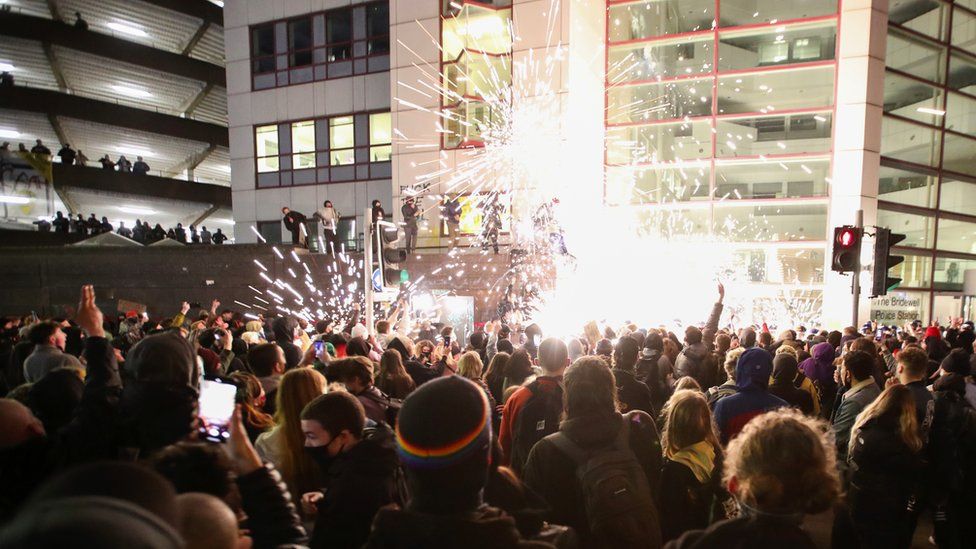 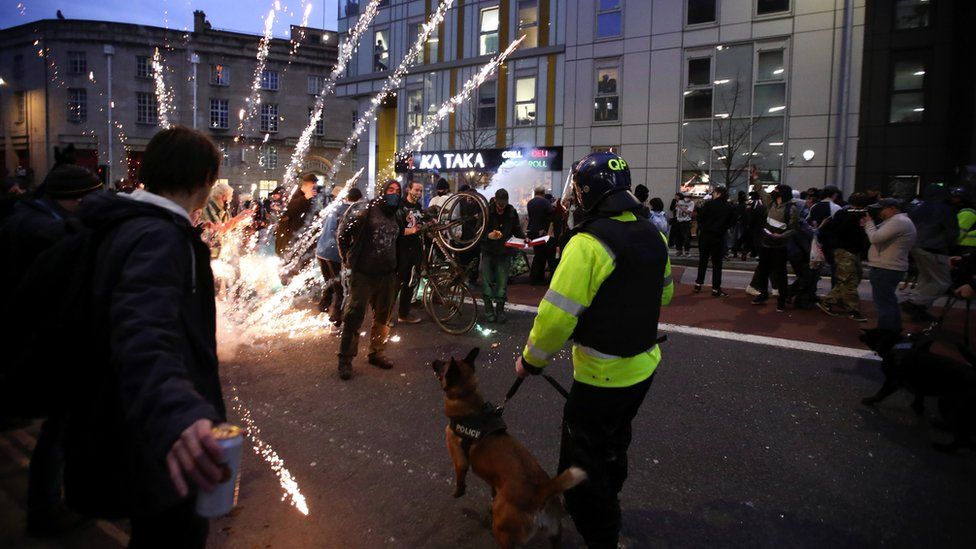 Fireworks exploded in the middle of the demonstration

Chair of Avon and Somerset Police Federation Andy Roebuck said: "This is the worst violence in Bristol for many, many years.
"It's really unprecedented violence. Between four and six or possibly more officers are seriously injured and some have broken bones.
"No one had any indication it would erupt this way."
Darren Jones, Labour MP for Bristol North West, tweeted that the scenes in the city were "completely unacceptable".
"You don't campaign for the right to peaceful protest by setting police vans on fire or graffitiing buildings," he said. 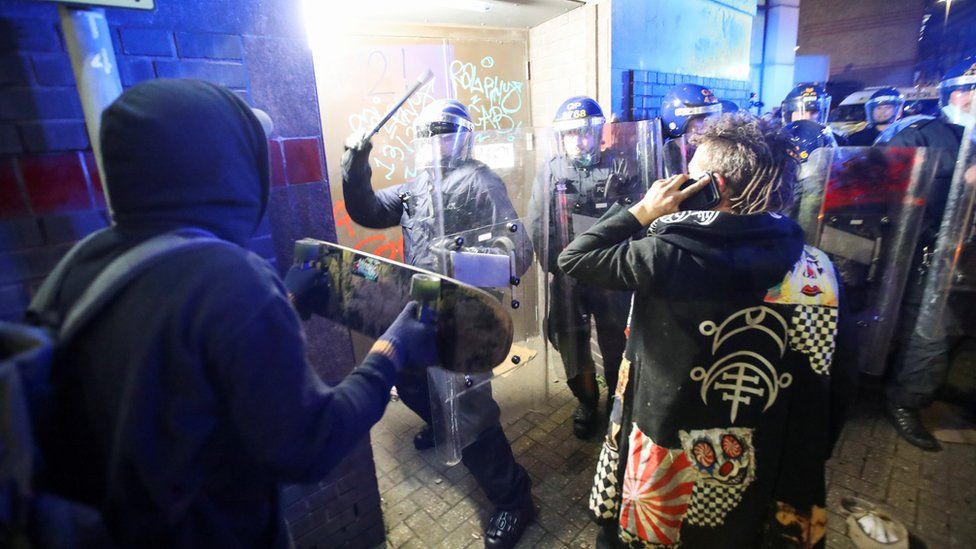 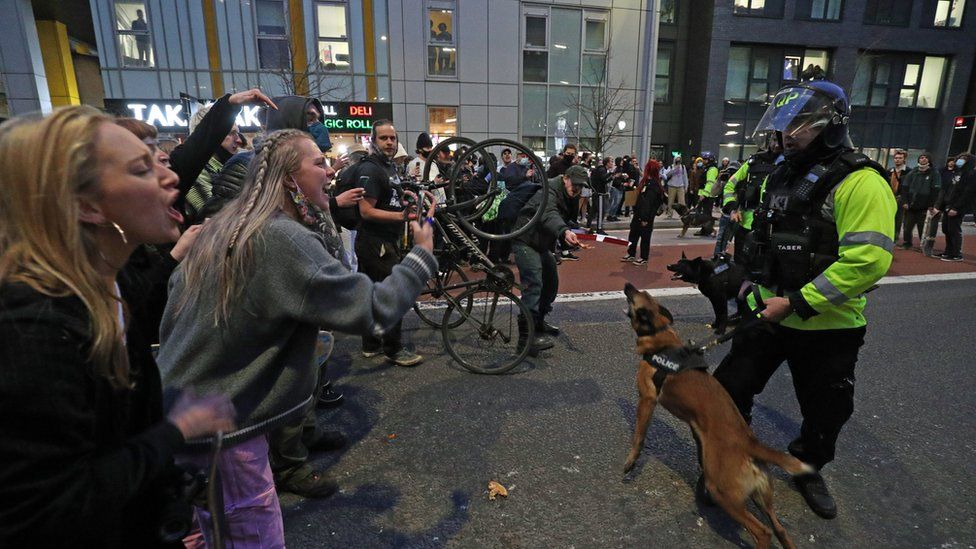 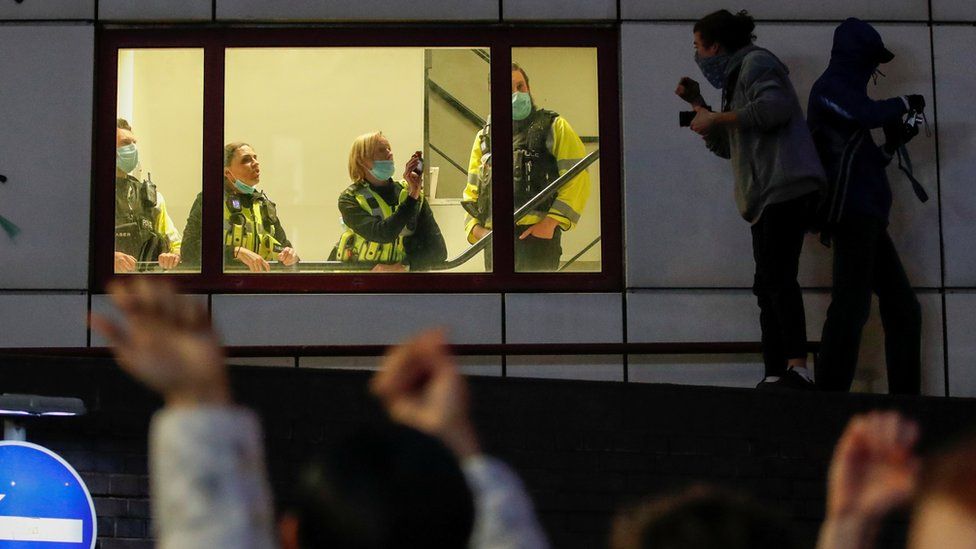 Videos on Twitter showed protesters rocking and kicking a police van while officers on horseback were pushed by the crowd.
"Officers are continuing to deal with a smaller number of protesters in Bridewell Street," a police spokesman said.
"They've had projectiles thrown at them, including a firework, and have been verbally abused.
"This is unacceptable behaviour and those responsible for offences will be identified and brought to justice."
Campaigners have staged a string of protests against the bill , which would give the police more powers to deal with non-violent demonstrations.
Many attendees in Bristol wore face masks and carried placards with slogans such as: "Say no to UK police state", "Freedom to protest is fundamental to democracy", and "Kill the Bill".
Avon and Somerset Police had encouraged people to stay away from the demo and attend virtual protests instead.

We're asking people not to attend an advertised protest in #Bristol later today. Our communities have already sacrificed so much as a result of the COVID-19 pandemic. We must all keep playing our part to stop any further spread. 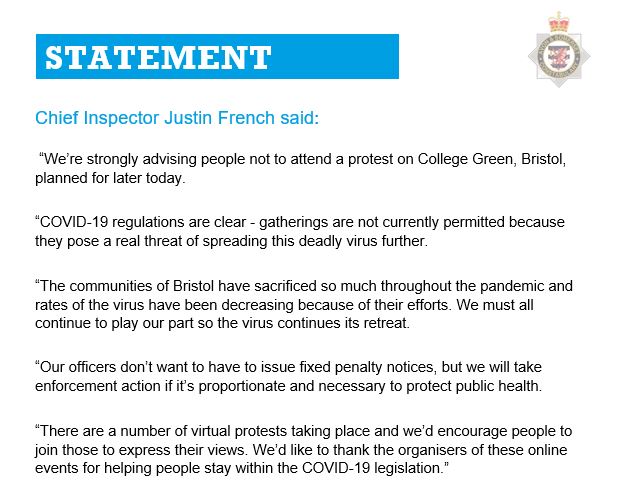 Mass gatherings are currently banned under coronavirus legislation and anyone breaching regulations could be fined, though some MPs have said the law should change to allow protests .
This weekend has seen a number of protests and demonstrations, with campaigners gathering in support of various causes. 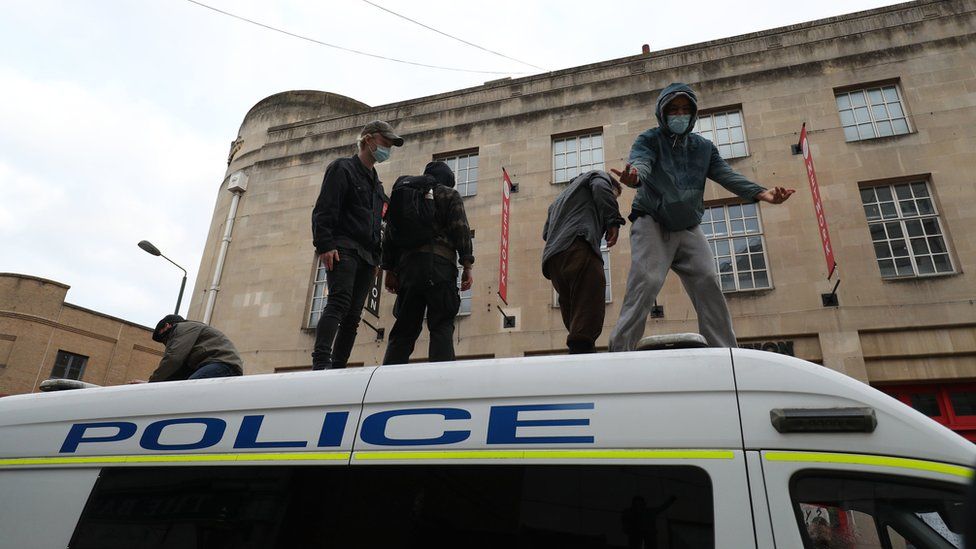 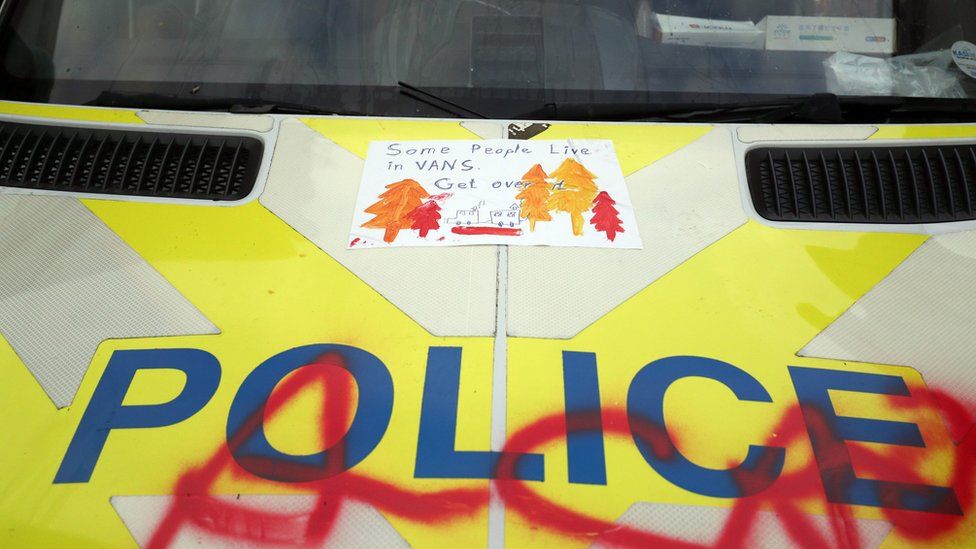 Graffiti was daubed on police vehicles and fireworks thrown

On Saturday, there were more than 30 arrests during anti-lockdown protests in London .
Elsewhere, several vigils were held to highlight issues around women's safety, including a gathering outside Exeter cathedral .
« View previous topic · View next topic »

Forum Café is a meeting place for forumites to socialise in a friendly environment and keep up to date with what's going on in forumland.
https://forumcafe.forumotion.co.uk/
Current date/time is Mon May 17 2021, 14:13