A Donald Trump waxwork sculpture has been removed from its display because customers kept punching and scratching it.

The figure, which was on display in Louis Tussaud's Waxworks in San Antonio, Texas, was beaten badly enough to leave deep marks on its waxy face, necessitating its move to storage.

"We've always had trouble with the presidential section because no matter what president it was, Bush, Obama or Trump, they’ve all had people beat them," said Clay Stewart, regional manager for Ripley Entertainment - who own the waxworks.

"They punched and scratched the figure, inflicting so much damage that management had it pulled from public view. 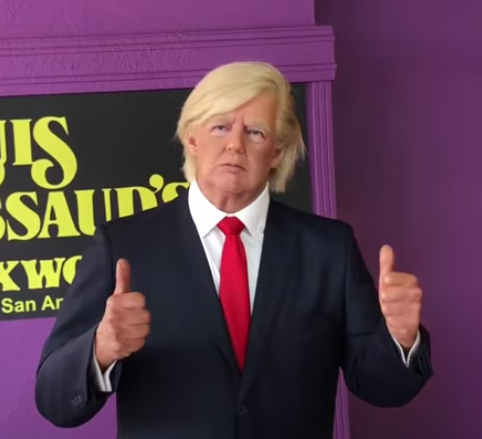 "People are just aggressive about their political party," he added.

When the company first displayed the Trump figure, they said in a statement: "Just as in real life, the wax Trump is polling at about 50% – loved by some Ripley’s visitors, loathed by others."

Elsewhere in the museum... if you can call it that... they've waxworks of Pope Francis, One Direction, Batman, The Undertaker, Michael Jackson, Will Ferrell, Morgan Freeman, Madonna, the minions from Despicable Me, and many, many more.

They are reportedly working on wax figure of Joe Biden to add to their display soon. Surely no one would want to punch an Irish President in the face, would they?

Forum Café is a meeting place for forumites to socialise in a friendly environment and keep up to date with what's going on in forumland.
https://forumcafe.forumotion.co.uk/
Current date/time is Mon May 17 2021, 13:48