UK Foreign Secretary Dominic Raab has accused the EU of putting pressure on the Good Friday Agreement with its approach to the ongoing Brexit negotiations.
by Jack Beresford - Irish Post

The claims came after Joe Biden was projected to win the 2020 election in the US, replacing Donald Trump after just one term in the White House.

Biden has been a vocal critic of the UK’s handling of the negotiations, specifically the Internal Market Bill introduced earlier this year by the British government as part of a move some viewed as an attempt at avoiding several key elements of the Withdrawal Agreement signed with the EU earlier this year.

Specifically, the bill allows ministers to override the legally-binding agreement in place with the EU by unilaterally waiving customs documents on goods travelling between Northern Ireland and the rest of the UK.

The bill drew criticism for overriding parts of the Northern Ireland Protocol agreed last year, in a move some critics believe could pave the way for a return to a hard border.

Biden let his feelings on the bill be known in a tweet warning the UK government that any deal that impacts on peace in Ireland would impact future trade deals.

We can’t allow the Good Friday Agreement that brought peace to Northern Ireland to become a casualty of Brexit. Any trade deal between the U.S. and U.K. must be contingent upon respect for the Agreement and preventing the return of a hard border. Period.

Chair @RepEliotEngel leads bipartisan effort calling on UK to honor Good Friday Agreement while negotiating Brexit. In a letter to @BorisJohnson, they warned that Congress will not support a free trade agreement if Britain fails to uphold commitments with Northern Ireland. 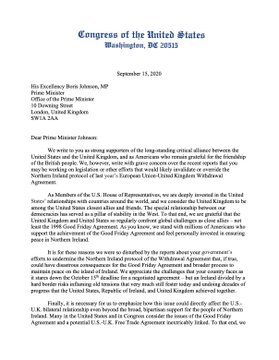 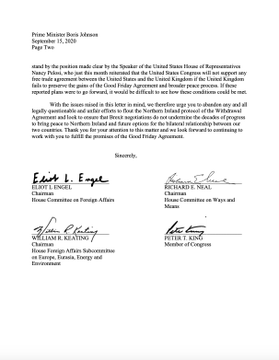 "We can’t allow the Good Friday Agreement that brought peace to Northern Ireland to become a casualty of Brexit," Biden tweeted.
"Any trade deal between the US and UK must be contingent upon respect for the Agreement and preventing the return of a hard border. Period."
Now Raab has sought to realign the argument with the claim that it is the EU rather than the UK who are attempting to turn the Good Friday Agreement into a negotiation issue.

#Marr asks Foreign Secretary Dominic Raab if the government is prepared to move on the Internal Market Bill to achieve a post-Brexit trade deal with the US #Brexit http://bbc.in/35aHc9W

He told the BBC's Andrew Marr Show: "We are very clear. We will never do anything to put at risk the Good Friday Agreement and of course if the EU does the same, this issue is resolved," he said.

"Out argument is that it is EU that has put pressure on [the Agreement] with the approach it has taken."

The claims come just a few months after UK Prime Minister Boris Johnson claimed the EU could potentially use the Irish protocol to blockade food to Northern Ireland in a claim minister Simon Coveney branded as “spin and not the truth”.

The UK government could struggle to forge a positive working relationship with the US under Biden, given his reportedly disdain for Johnson.

It stems from Johnson’s previous claim that President Barack Obama’s decision to remove a bust of Winston Churchill from the Oval Office was “a symbol of the part-Kenyan president’s ancestral dislike of the British empire.”

One source also told The Sunday Times that Vice-President-elect Kamala Harris is similiarly unimpressed with the UK Prime Minister, telling the newspaper: “If you think Joe hates him, you should hear Kamala.”
« View previous topic · View next topic »