There were ugly scenes in Dublin this past Saturday as anti-lockdown demonstrators clashed with counter protestors in the centre of the city.

Two men, one in his 30s and another in his 40s, were arrested for public order offences as Gardaí struggled to contain violent exchanges involving individuals from both sides.

The original protest, which was organised by anti-mask and anti-lockdown groups and included demonstrators from the right-wing National Party, began outside Leinster House at 1pm.

Violent scuffles started to break out when the rally encounter a group of up to 100 counter-protestors who had gathered opposite the Shelbourne Hotel on Stephen’s Green.

According to the The Irish Times , the “highly coordinated” group, who were mostly dressed in black, marched on Leinster House chanting “Nazi scum, off our streets.”
As they approached each other, anti-lockdown protestors could be heard shouting “Antifa” in reference to the anti-fascist action and left-wing political movement in the United States that comprises an array of autonomous groups.

A reporter from The Irish Times witnessed the scenes firsthand as violence erupted between the two groups who began surging towards each other, with dozens seen throwing kicks and punches while fireworks and other projectiles were launched.

Shocking scenes from Dublin today.These people have nothing to offer Irish society.
If their hoods where removed we would see just a bunch of thugs.

As many as 100 Garda personnel were on the scene in anticipation of a possible clash with mounted units. Garda dogs and the National Public Order Unit all deployed along with several plain clothed officers.

When the violent clashes erupted, Garda officers were quick to establish a dividing line between the two groups while steel barriers were erected to keep the two sides apart.

Despite the large number of officers deployed, gardai struggled to contain the protest, with demonstrators from both sides attempting to circumvent the barriers between the two sides in an attempt at reigniting the violent clashes.

In a statement, gardaí said: “Garda members were forced to intervene on a number of occasions during the course of the afternoon to keep opposing sides apart and maintain public safety before the groups eventually dispersed without any serious incident shortly after 3.30pm.”

The Gardai are currently kettling a rabid anti-democracy mob of self-styled 'antifa' extremists in #Dublin.
Regrettably hundreds of people attending the peaceful anti-lockdown protest - including families - had to be turned away due to the 'antifa' threat of violence. 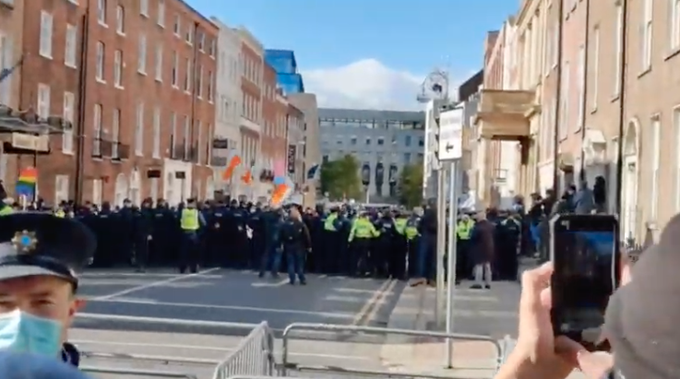 Gardaí has confirmed that an investigation focused on the organisers of the two protests is now underway.

“Although the Public Health regulations do not prohibit protest marches or gatherings, they do provide an offence for a person to organise such events. An Garda Síochána is investigating all such protest marches,” gardaí said.
« View previous topic · View next topic »

Forum Café is a meeting place for forumites to socialise in a friendly environment and keep up to date with what's going on in forumland.
https://forumcafe.forumotion.co.uk/
Current date/time is Mon May 17 2021, 13:45