.
A further 2,988 cases of coronavirus have been reported in the UK in the past 24 hours, government data showed.

It is the highest number reported on a single day since 22 May and a rise of 1,175 on Saturday, according to the UK government's coronavirus dashboard .

Health Secretary Matt Hancock said he was "concerned" about a rise in cases "predominantly among young people".
Two further deaths within 28 days of a positive test were recorded, taking the total number of UK deaths to 41,551.
Mr Hancock added: "It's so important that everybody does their bit and follows the social distancing because it doesn't matter how old you are, how affected you might be by this disease, you can pass the disease on to others."
"So don't pass the disease on to your grandparents if you're a young person, everybody needs to follow the social distancing."
Despite the sharp rise in cases, Mr Hancock said the government was right to reopen schools "because of the impact on children of not getting an education", adding that workplaces which have reopened are "Covid-secure". 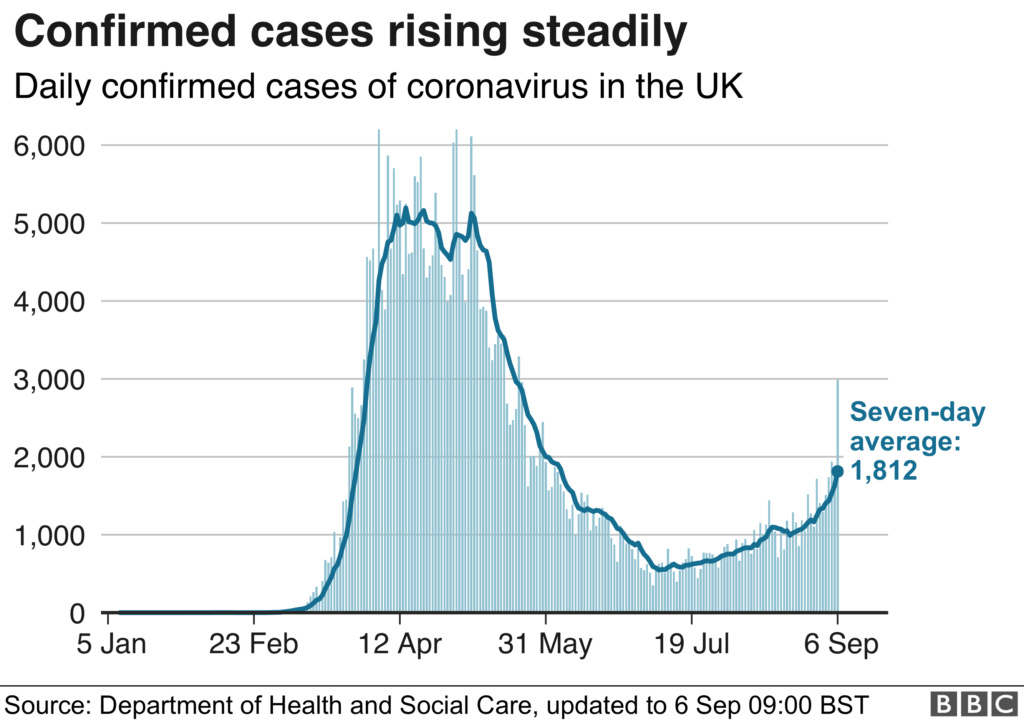 The number of daily reported cases has been rising steadily and some of that has been put down to an increase in the number of people being tested.
Put simply, the more you test the more new cases you will find. But the jump of more than one thousand in a day is a significant new spike.
The health secretary says the government is concerned and has renewed official calls for more vigilance on social distancing.
What Matt Hancock and health officials are worried about is that the UK might follow the same path as France and Spain, where increases in infections amongst younger adults led after a few weeks to higher numbers of admissions to hospitals for older and more vulnerable patients.
The number of people seriously ill in hospital with Covid-19 has fallen and there were just two new daily reported deaths.
Medical leaders and ministers can only hope that the spread of the virus amongst younger people does not get passed on to the elderly and those with underlying health problems.

Labour's shadow health secretary Jonathan Ashworth said ministers needed to "set out what is being done to get testing back on track and bring case numbers down".
He said the increase in cases came on top of "the ongoing testing fiasco where ill people are told to drive for miles for tests, and the poor performance of the contact tracing system".
Increased demand led bosses in charge of the coronavirus testing system to apologise after it emerged UK labs were struggling to keep up .
Screening capacity was described last week as being "maxed out" - 170,000 tests a day are being processed, up from 100,000 in mid June.

Prof Paul Hunter, an expert in outbreak response at the University of East Anglia, said some of the rise may be due to the system catching up after delays when it struggled to keep up with demand, but added it was still a "marked increase".
"Sadly it is beginning to look like we are moving into a period of exponential growth in the UK epidemic, and if so we can expect further increases over coming weeks," he said.
Birmingham had the single largest increase in cases overnight, and the majority of new cases were in the north of England, said Yvonne Doyle, Public Health England's medical director.
But she said no single area accounted for the overnight change, with broad increases in Covid-19 cases across England.
The rise in positive tests came as tougher measures limiting household contacts were introduced in Bolton in an effort to stop coronavirus cases rising and prevent a full local lockdown .
The infection rate in the area has risen to 99 cases per 100,000 people per week - the highest in England.
Commenting on Scotland's increase, First Minister Nicola Sturgeon said: "While this reflects the substantial opening up of the economy, it reminds us of the need to deploy counter measures."
She added that the "first line of defence" is to "take greater care on face coverings, hygiene and distance".

Meanwhile, speaking earlier on Sunday, Foreign Secretary Dominic Raab said the economy "needs to have people back at work".

Mr Raab acknowledged there was likely to be a "bit more" remote working in future.

However, he added: "It is important to send a message that we need to get Britain back up and running, the economy motoring on all cylinders."