Restrictions to deal with new coronavirus outbreaks have been imposed in parts of Europe since lockdowns were eased.
So what are these measures and how do they compare in different countries?

On 4 May, Spain set out its plan to start easing one of the strictest lockdowns in Europe, which saw children under 14 confined to their homes for six weeks.
While coronavirus appears to be under control in much of the country, Catalonia - including Barcelona - and neighbouring Aragón in the north-east saw a huge spike in infections in July. 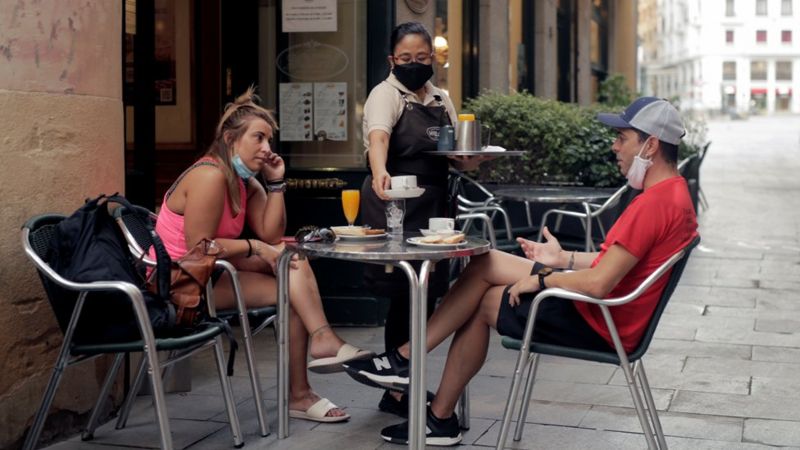 The Madrid region introduced the mandatory use of masks outside

Stay-at-home orders have been issued to four million residents in Catalonia, and stricter measures could yet be introduced.
Madrid has seen a spike in cases, leading to compulsory face masks in public - regardless of whether social distancing is possible.
In a huge blow to tourism, some European countries issued travel warnings for the affected regions of Spain - and the UK imposed a 14-day quarantine for anyone arriving from Spain.

Germany began easing its lockdown in April, allowing small shops to open.
In May, shops of all sizes and schools started to reopen. Bundesliga football matches also resumed behind closed doors. 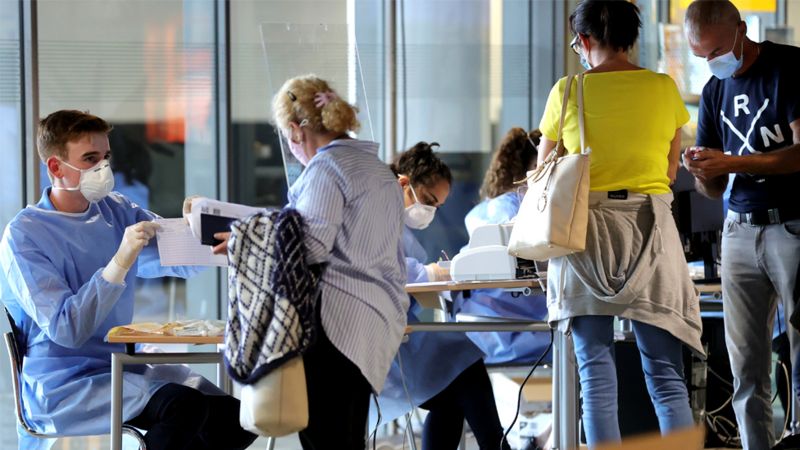 However, a surge in cases linked to a meat-processing plant near the western town of Gütersloh triggered new local lockdowns on 23 June.
The government has announced that from 8 August free testing at airports would be compulsory for all travellers arriving from high-risk countries.
The federal and regional governments have also agreed new rules to contain local outbreaks in future, such as travel bans in and out of coronavirus hotspots.
Children are starting to go back to schools in August and in some areas they will have to wear masks at all times. 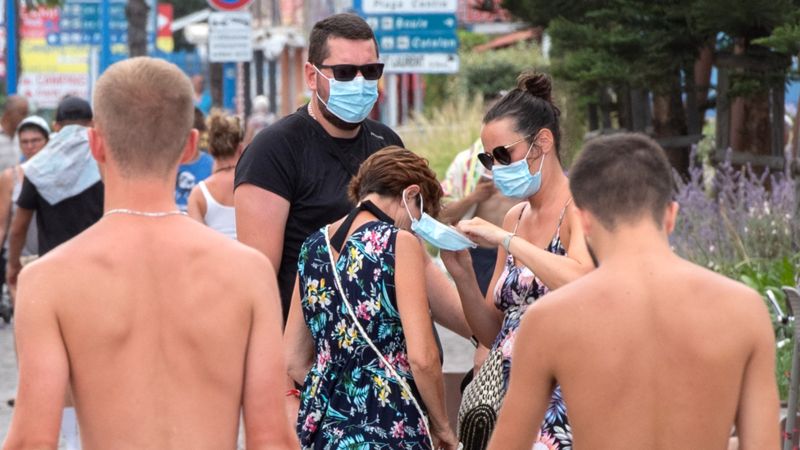 Masks are compulsory outside in some areas of France

France's lockdown was imposed on 17 March, but restrictions began to ease on 11 May.
However, following fresh outbreaks in July, the French government made face masks compulsory in all enclosed public spaces.
The government said it would impose local lockdowns rather than another national one, if there was a second wave of infections.
Cases are rising in the north-west, in Mayenne in particular, and in eastern regions where the wearing of masks is obligatory outdoors and where gatherings of more than 10 people have been banned.
Some beach resorts - now crowded because of the heatwave - have made mask-wearing outdoors compulsory, not just indoors.
The city of Toulouse has introduced new rules requiring face masks in its busiest streets, with Paris and a number of other cities expected to follow suit. 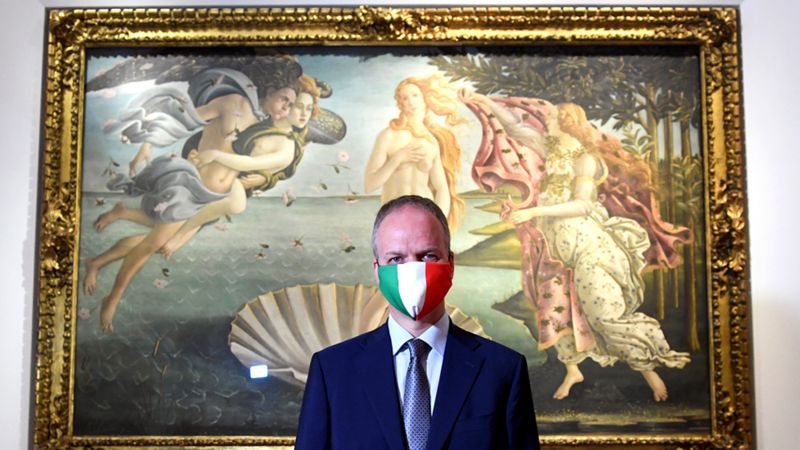 Italy's strict lockdown started on 7 March and was gradually lifted two months later.
Bars, restaurants, hairdressers, museums and tourist sites all reopened with strict social distancing and the compulsory wearing of face masks.
On 3 June, Italy reopened its borders and ended regional travel restrictions.
However, in July infections rose again in Rome and the surrounding Lazio region.
Police closed popular squares in Rome to limit crowds at weekends. Clubs which did not follow social distancing rules were also closed. 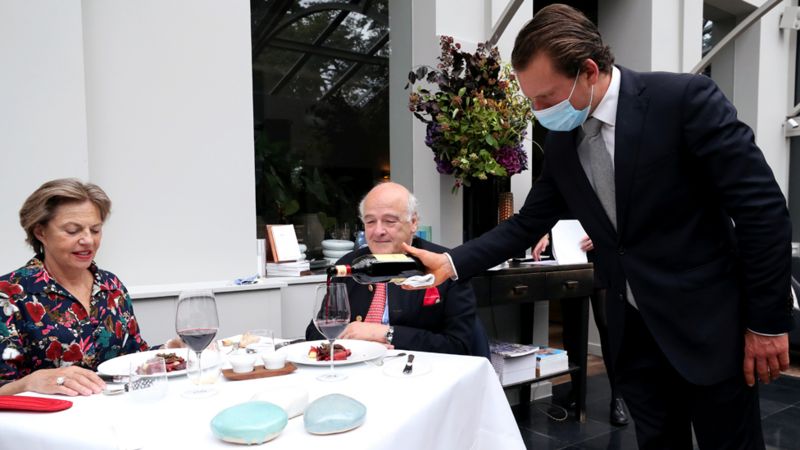 A cautious reopening began in Belgium in early May

In Belgium, shops, schools, markets, museums, zoos, hairdressers and beauty salons were gradually allowed to open from early May.
Sports events, religious services and village fetes have been allowed since 1 July as well, with a maximum 200 participants or spectators indoors and 400 outside.
However, in recent weeks Belgium has seen a rise in new infections.
The city of Antwerp, which saw a spike in infections, introduced a curfew at the end of July. In restaurants, a maximum of four people are allowed to sit at a table, although larger households are allowed to sit together.
The government decided not to go ahead with the next phase of reopening which was planned for 1 August and has issued warnings against travel to a number of areas in Europe.
At the same time, several European countries issued warnings against all but essential travel to Belgium and the UK has imposed a 14-day quarantine.
Nightclubs remain closed and no major events, such as festivals, are allowed.

On 1 July the Netherlands lifted the upper limit for people inside or outside shops and some other services, provided they stick to 1.5m social distancing.
Further measures to ease the lockdown were also brought forward. For example, brothels were allowed to open on 1 July, from their planned reopening in September. 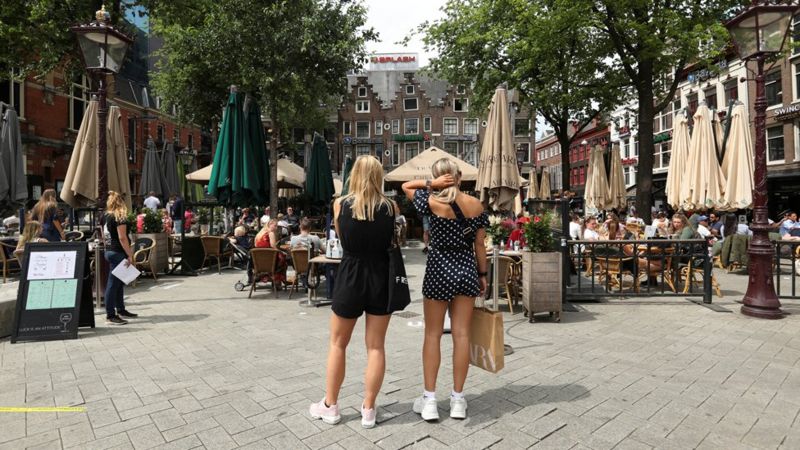 However, the rate of infection started to climb up again and on 6 August new measures were announced, including local closures of cafes, cinemas, museums and amusement parks for 14 days in case of an outbreak. Local authorities are given powers to impose curfews and further restrictions.
The government warns against all but essential travel to Sweden, Croatia, Romania, Bulgaria and areas of Spain, the UK, Portugal and Belgium.
Voluntary testing will be introduced at airports for those arriving from high risk areas.

Portugal has had fewer coronavirus cases and deaths than some other south European nations.
The government reopened different sectors of the economy every 15 days: restaurants, coffee shops, museums and beaches opened in May and June. 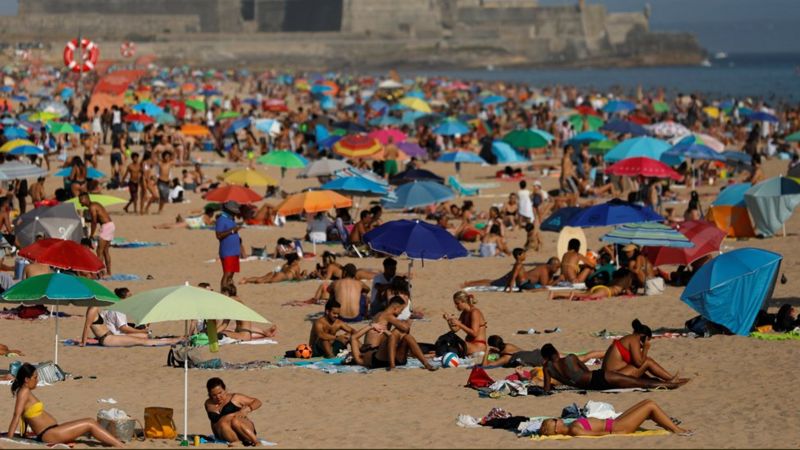 The UK has advised against all non-essential travel to Portugal

The final phase of reopening started on 1 July.
Hotels have mainly reopened, but nightclubs remain closed.
The UK has advised against all non-essential travel to Portugal, since Lisbon saw a spike in infections. The Portuguese government complained, as British tourists usually flock to both Portugal and Spain in summer.

Greece recorded its first Covid-19 case on 26 February and the government swiftly imposed a lockdown.
Relaxation measures started in late April, with a particular focus on opening up the country for the summer.
However, the number of cases started rising again in July. 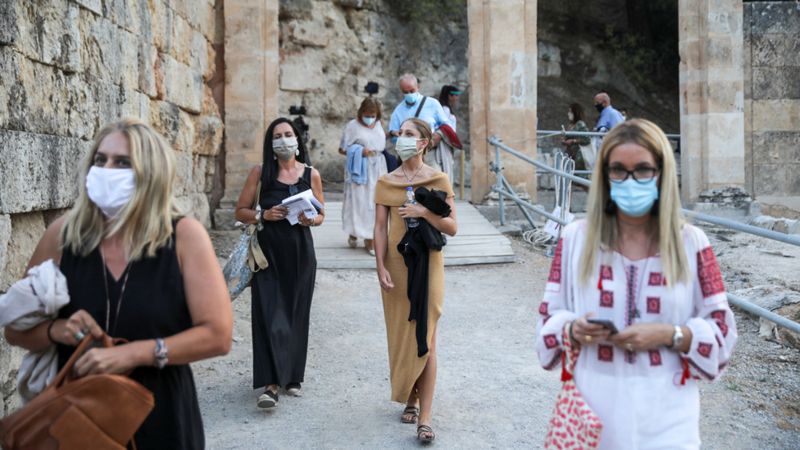 The number of cases in Greece started rising again in July

Since 29 July, face masks have been obligatory in supermarkets, shops, cafes, banks, government offices and hairdressers.
Travellers to Greece have to fill in the new online Passenger Locator Form at least 24 hours before departure, so that they can be tracked in case of emergencies.
From 5 August, Athens International Airport will offer testing to any passenger on request, at a cost of €70 (£63).

Ireland has had a stricter lockdown than the UK, with residents only allowed to exercise within 2km (1.2 miles) of their homes. A phased easing of restrictions started on 18 May.
The government still advises against non-essential travel overseas. This includes Britain, but does not apply to Northern Ireland. It also includes all travel by cruise ship.
There is a limited list of countries which are exempt from this advice , including popular tourist destinations such as Italy and Greece. People coming back from these locations are not required to restrict their movements on arrival.
Kitkat

On Saturday, the Irish Department of Health announced one further coronavirus-linked death

Restrictions put in place in Kildare, Laois and Offaly could apply to other areas in the future, Ireland's acting chief medical officer has said.

Residents are not permitted to travel beyond those counties except in limited circumstances.
The restrictions, announced on Friday in response to a spike in cases of Covid-19, came into effect at midnight.
Cafés, restaurants and bars have been closed, and there will be no sporting events.
Cinemas and gyms were also closed under the restrictions, which will remain in place for two weeks.
"It won't take much for other regions to have a problem as well," Dr Ronan Glynn told RTÉ.
"We need everyone to be cautious and follow public health guidelines."

On Saturday, the Irish Department of Health announced one further coronavirus-linked death and 174 new cases, 110 of them in County Kildare.
Dr Glynn said the National Public Health Emergency Team had been expecting an increase in cases.
"Throughout this week, we have been testing all workers in facilities where outbreaks of Covid-19 have been identified as well as close contacts of those people who have received Covid positive results," he said.
"Our priority now and our reason for recommending the proactive measures, is to avoid these cases and clusters leading to widespread community transmission of the disease."
Under the restrictions residents will be permitted to travel outside of the three counties for the following reasons:

People are being asked not to travel to these counties unless for work.
Visits to nursing homes, prisons and acute settings in these three counties should be suspended, except on compassionate grounds.

Checkpoints have been set up by Gardaí (Irish police) in areas near the borders of the counties to ensure the public are complying with the restrictions.
Places of worship may remain open for private prayer, but the government is urging Masses and religious services to be delivered online. A maximum of 25 people can attend funerals.
No sporting events or matches should take place, however, non-contact sports and training may continue outdoors, subject to a maximum of 15 people.
All indoor gatherings including any type of household, private family or social indoor gatherings of people will be restricted to a maximum of six people from no more than three households in total.

In a televised address on Friday evening, Taoiseach (Irish PM) Micheál Martin said clusters were a "serious concern" and "we must protect public health", adding that "everything else is secondary to that".
He said while the government would do everything possible to prevent a return to high levels of transmission, citizens held an "equal responsibility".
"Pause and reflect on what you can do to support those businesses adhering to the advice and steer clear of those who are not," he said.
He urged people to live the words of the late SDLP leader John Hume , who said "solidarity is strength".

A large number of the Kildare cases are linked to outbreaks in meat and food processing factories.
One Kildare employer, O'Brien Fine Foods, in Timahoe, confirmed it had suspended operations after 80 of its staff tested positive for Covid-19.
In a statement, the food company said it had engaged a private testing provider and added "the level of asymptomatic infectivity appears to be very high".
Earlier this week, Prof Philip Nolan from the National Public Health Emergency Team confirmed that the Republic's of Ireland's R rate was now estimated to be 1.8.
The R rate, or reproduction rate, refers to the average number of people a newly-infected person is expected to pass the virus on to after contracting the disease.
Prof Nolan said a reproduction number of almost two is a "serious concern".
He added that "although we have not yet seen a significant increase in community transmission, there is a significant risk this could develop over the coming days and weeks".
« View previous topic · View next topic »