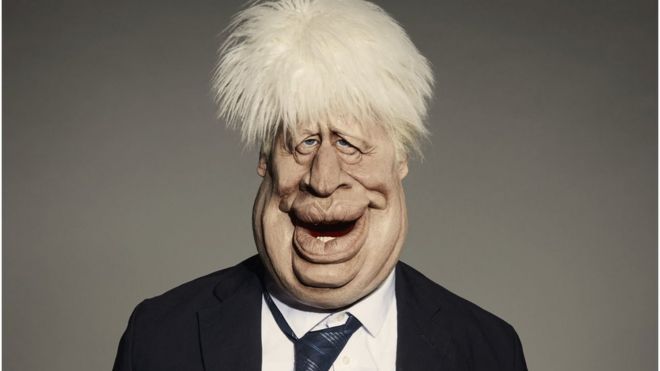 
A puppet of Boris Johnson has been unveiled ahead of the return of satirical TV show Spitting Image this autumn after 24 years.
The programme, made famous in the mid-1980s, is due to be recreated by the BBC and ITV for their Britbox streaming service.
Puppets of the prime minister's senior adviser Dominic Cummings and Prince Andrew have also been revealed.
The show originally ran for 18 series from 1984 until it was axed in 1996.
The new series is also set to mock politicians around the world, including US President Donald Trump and Russian leader Vladimir Putin.

Mr Johnson, depicted with unkempt blonde hair and a badly knotted tie, is the latest prime minister to be depicted in rubbery form by the programme.
Mr Cummings, known for a more informal dress sense, is depicted wearing a blue hoodie and black gilet, with a large silver collar. 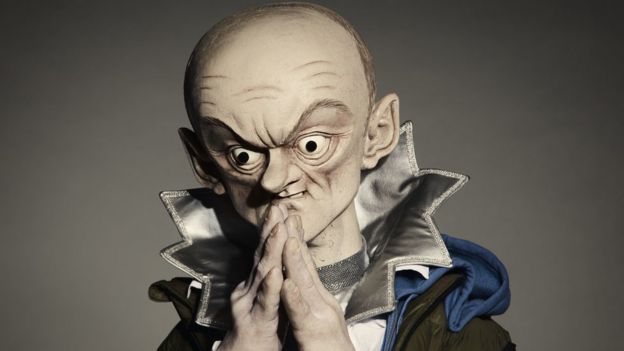 The show memorably featured former Conservative PM Margaret Thatcher in a man's suit berating members of her cabinet, known as "the vegetables".
Her successor John Major, who was in No 10 between 1990 and 1997, was caricatured as a dull, grey puppet with a penchant for peas.
Prime ministers serving after him - Labour's Tony Blair and Gordon Brown, as well as Conservatives David Cameron and Theresa May - escaped the experience of being regularly parodied on the show during their time in No 10. 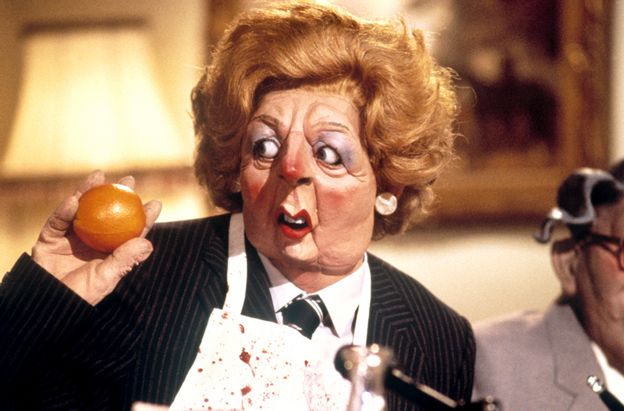 Mrs Thatcher, often shown in a suit, was addressed by her cabinet as "sir"

The original show, which was watched by 15 million viewers at its peak, also took aim at several other politicians during its twelve years on air.
Douglas Hurd, a cabinet minster in Mrs Thatcher's government, was depicted with "Mr Whippy ice cream" hair. 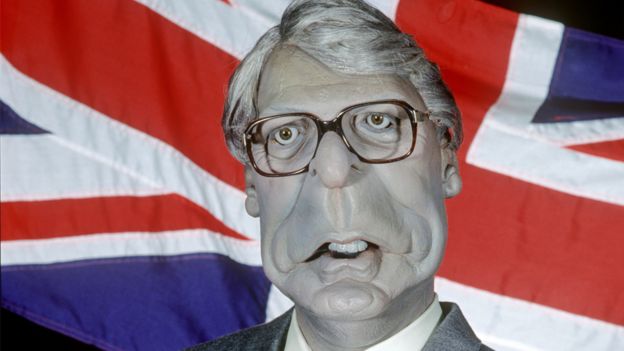 John Major's puppet was cast to give the former Tory leader a grey complexion.

Meanwhile Labour figures that were regularly mocked included former leader Neil Kinnock and deputy leader Roy Hattersley.
The new version will be produced by production company Avalon. Roger Law, co-creator of the original, is on board as executive producer.
He has previously promised the new Spitting Image will be "more outrageous, audacious and salacious than the previous incarnation." 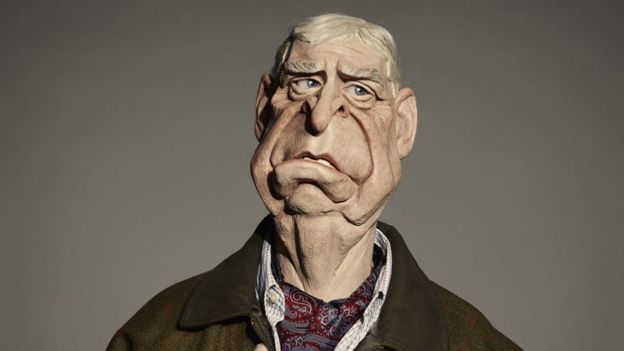 As well as politicians, Prince Andrew will be among the famous faces recreated as puppets

BritBox is a subscription video streaming service from the BBC and ITV.
The broadcasters are joining forces to set up the subscription service in the UK as a rival to the likes of Netflix.
It will cost £5.99 per month in HD, launching between October and the end of December.

The anarchic show that packed a punch

Meanwhile, lockdown measures enforced due to the Covid-19 pandemic saw a surge in TV watching and online streaming, according to media watchdog Ofcom.
Its annual study into UK media habits suggested adults - many stuck indoors - spent 40% of their waking hours in front of a screen, on average.

Re: Boris Johnson: Spitting Image puppet unveiled ahead of relaunch

Problem is the only place we gonna be able to watch it is on Britbox.

Re: Boris Johnson: Spitting Image puppet unveiled ahead of relaunch

Whiskers wrote:Problem is the only place we gonna be able to watch it is on Britbox.